A Remarkable Economy of Means 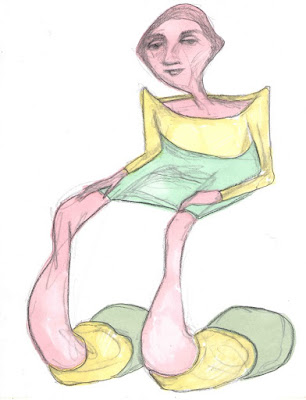 I don't think there's any such thing as free will. This sounds like a terrible thing to say only if taken too quickly to mean its arguable opposite: we're robots. We are not robots, we are odd miraculous living systems of biologically collaborative 'parts', the job of one of which, largely the prefrontal cortex of the brain, is to decide for the survival of the whole that it knows what's going on and therefore can make decisions which will keep it alive. It's the job of that Deciding Mind to hoodwink itself into thinking it's the boss.

Actually (I now believe -- sorry, Prefrontal Cortex) when we 'choose' to do something instead of something else, what we're reacting to is a reflexive struggle in us between impulse and restraint. Not a purely mental tug-of-war (I don't believe there is such a thing), but one engaging our most potent hormones and neurotransmitters - adrenaline to dopamine. If we 'choose' restraint instead of impulse, or vice versa, we like to think this is evidence of free will: that our waking consciousness (sense of self) managed to be the boss. But really it's evidence of a whole-system reaction to desire and fear. It's more unconsciously innate (better word than ‘hard-wired’) than any easy notion of "choice." We may decide after the fact it is 'wise' in a pragmatic way. But to me the whole system at work is responding to its own in-the-flesh imperatives: its biology. This means a whole lot more is going on than any singular decision or observation we can articulate.

William James tackled, addressed and finally agreed with the idea - now largely corroborated by technology (brain scans, etc.) unavailable to him - that when we (for example) "decide" to get out of bed, in fact the body has decided a fraction of a second before the mind has caught up with it. What the mind is really implicitly deciding (after the fact) is that the choice to get out of bed was its choice. The only pragmatic, indeed possible solution for William James, save madness (which he believed himself to be on the brink of, torn as a young man for years by his many ambivalences), was to believe that he had free will to decide what to do. "My first choice was to choose to believe in free will." This has a wonderful sonorous American ring to it, not least because it reassures us, I suppose, that we can exert "agency." It has great provisional use. (12 step tenets are based on it.) It's part of the way we do the best Alan Watts says we can do: muddle through. But it doesn't address enough of the whole strange phenomenon of our humanity - our Being. Therefore it remains as hollow a pretense as any other.

Back to the 'body' deciding before the 'mind' knows about it. And that being part of how the whole system of each of us works. A brain (prefrontal cortex included), is of course as much the body as a toe or a pancreas. A thought is as biological as a sneeze. No part of the animal is greater than the unity of its billions of collaborative parts. There is an already complete complex and largely successful universe operating in you, hard at work at what Quentin Crisp called (and claimed as his occupation) "The Profession of Being." Which suggests (surely not only to me) what we might more profitably be considering: not so much our power to choose what to do, but to learn what by nature we are. That is, what we by nature are already. To investigate what that suggests about the wellsprings of our behavior. Perhaps first of all to value this truth about ourselves: not that we're imprisoned by an unchangeable template, but rather that we each are inimitably configured to respond in ways that make me Guy and you Alphonse. Actually I don't know an Alphonse, but there must be many, so here's a shout out to all you Alphonses, and everyone else too: to look at yourself first and always as an already operative complete sentient being whose behavior is endlessly telling you what and who the miracle of you is, therefore never not revealing your loves and your aversions, what you want and what you don't want in your life.

(I'm consciously not mentioning 'spirituality' as an agent here. I don't believe in spirituality as an extractable or external force, just as I don't believe in 'thinking' as constitutively different from breathing or Going to the Bathroom. Everything expresses itself in and through the amazing physical instrument each of us is. To me the word/notion 'spiritual' is clearest when most lightly defined -- say it, & leave it -- in the best (maybe the only!) phrase I know from the New Testament: "the word ... made flesh." If the word ain't flesh, we can't know it. You want miracles? What we call the 'physical' is a miracle. (Which makes it meta-physical!) Nothing isn't a miracle. Every incarnation of existence is a miracle. Existence itself is. That would include our flesh.) A remarkable economy of means, all in all.