Kaleidograms - The Pleasures & Conundrum Of 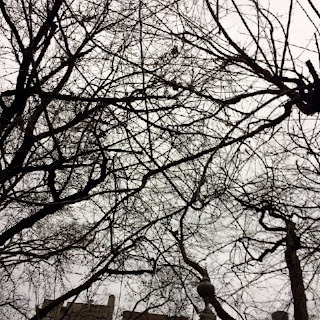 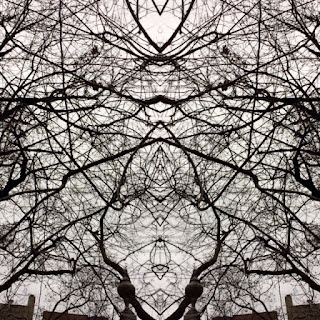 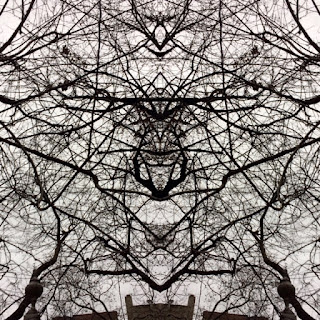 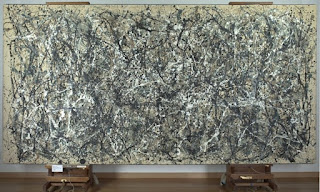 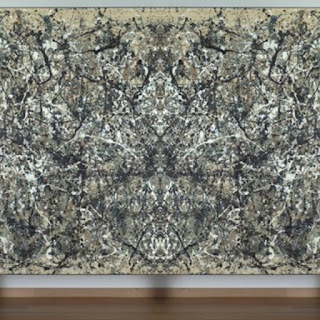 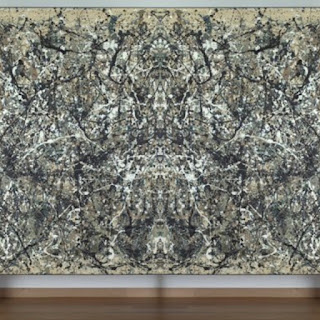 I continue to think I'm on to something interesting with all the kaleidograms I keep posting on Facebook and Instagram.

Kaleidogram is the name my friend Reed gave them: seems to me spot-on. Captures the enforced symmetry a kaleidoscope brings to randomness. But kaleidograms seem to me to venture into deeper territory. How I discovered them was through the Layout App on Instagram, which permits you to divide into geometrical quadrants any photo you take - photos produced in this case by my very good iPhone camera. I'm besotted with my city - New York is my muse and my lover. Her trees and tree branches especially regale, so I take plenty of pics of those. But kaleidogramming them  has been startling; I'm amazed not so much at the symmetries that ensue, but that they're almost always astonishingly both beautiful and interesting. They become such powerful, strange, sometimes harrowing Rorshach tests - the faces you see in them! Fantastical stage sets, movie extravaganzas, caverns and seas and skies: the sorts of ravishing things dreams can create.

Really it IS interesting, these differences we find between our visual attractions & repulsions. What astonishes some apparently constitutionally naive part of my eye is that from what it takes to be chaos (however pleasing) pre-kaleidogram always, post-kaleidogramming, bursts into instant intricate symmetry - without 'thinking' to do it - just as if it's a encoded in its template or DNA.

Maybe mostly to the point when all you do is halve the thing. Wouldn't it still seem more like two equal chaoses, instead of a perfectly aligned unity? It's as if a sudden inarguable 'meaning' dawns in it when the pic is kaleidogrammed. Again, for me, most powerfully the case as here - when the pre-kaleidogram pic is as dense with branchery as this one is. It's akin to the pull I feel in my fave Pollock painting - with the difference that Pollock has already granted his panorama a sense of balanced unity by distributing its stresses and reliefs in a composition which has to me the pleasing effect of symmetry - sort of beats with the heart of it. But what is very much the same is the feeling I have both in the Pollock painting and especially in my denser kaleidograms of being able to enter them, as if into a forest, inspect them at close hand & partake somehow of their currents of meaning - see and follow this or that 'run' of thought - not unlike playing Bach. Symmetry on this level of dense intricacy does more than please the eye: the more intricate the disposition of its 'vocabulary' the more something seems as if it's been (or being) said. It's like creating a thinking mind. and Lordy, look what happens to Pollock when you halve IT. It gives imposed kaleidogrammification the harshest test to which I've yet submitted it. But - it 'obeys' as well. Although utterly and rightly against the painting's will. Pollock defies messing with in this way, and should. But trees et al. seem rather to like it - sort of like dogs rubbing up against you to massage behind their ears again the wonderful way you did it last time.

I keep waiting to not find this interesting, but so far I wait in vain. It opens up sort of wondrous new bewilderments about the 'what is art' conundrum. How much depends on human agency in the making-of-it - and/or on human agency in the looking-at-it? When I see a tree out there just being a tree and find it art, is it art? The you-know-me wants to say, why not?

Well, I guess not exactly new bewilderments: scads of 20th century art put this notion to a test: from planting a toilet in a gallery to presenting depictions of tomato soup cans. But the bewilderments seem fresh to me here.