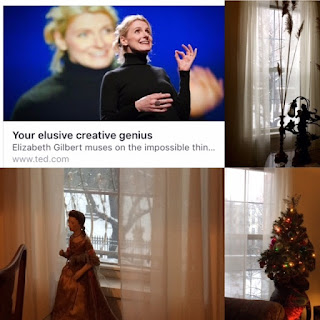 I woke up this morning to discover two miracles beyond the 'permutations in blue' ones I proffer below: the first was to find Evan Graner's share on Facebook of a Ted Talk, in whose list of 'creative' recipients he kindly included me, which offered the Eat Pray Love lady Elizabeth Gilbert's take on the wellsprings of creation: the inescapable sense that what comes from us comes TO us from something beyond us. It is so very wonderful, and aligns so closely with my own experience of 'receiving' what keeps me alive to the world, that I too feel the need to spread it around. Here's the link to it:

The second miracle proceeded from walking out from my bedroom to my living room and studio to see my first snowfall in New York in what I think of as the first real home (into which I moved on the first day of Spring almost nine months ago) I've ever had.

(Cobbled-together images of both, above.)

Freshly knitting any sense of 'miracle' to the Permutations in Blue one featured here was my foray on Facebook yesterday into reflecting on the strange power and beauty and use of my studio - a room in my home devoted to me sitting in it to write & draw & look out its window. I sought and found four models in my life for this experience - my mother Alice, my father Carl, Donna Boguslav and Quentin Crisp - each of whom quietly insisted on creating what Virginia Woolf called "a room of one's own" centrally for the purpose, as it seemed to me, of bringing form to their visions. The 'studio' (to these people and to me) of course was/is just as centrally what my friend Steve Holland, who grew up next door to me in Amityville and 'took in' my parents so attentively, described in his eloquent response to this piece was to him more contemplative refuge than workshop, rightfully suggesting that what my mother was responding to and creating in her work had as much if not more to do with how she responded to the rest of her life, and that artists are 'messengers' (in Elizabeth Gilbert's sense) more than self-driven egos: yes, yes, yes. But for me, now, in the fresh wake of curiosity about my own studio's function (how I use it, how it uses me), I do see it first as a workshop - a place where you sit down and Do the Thing. What alchemies this 'place' can lead you to! Here's a link to that: http://guykettelhack.blogspot.com/2016/12/notions-about-notion-of-studio.html

(pic accompanying that, which seems like it ought to go here too) : 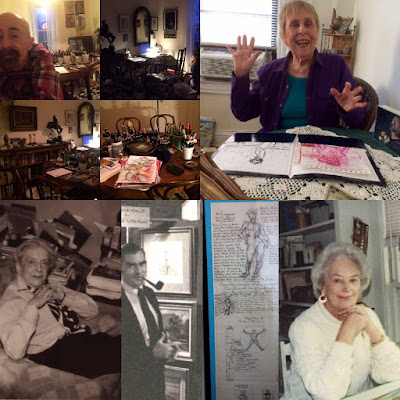 Now to the miracle of "Permutations in Blue" - or rather what I can lay bare about it, which couldn't be simpler. They're the product of what you see in what I awkwardly refer to as my Layout App Symmetricizations, mostly of photos of my beloved New York, splayed all over Instagram and Facebook - the all but mindless easy-as-ABC manipulations that the Layout App afford you on your iPhone to turn, for example, this toss of tangled thin blue ribbon-ish packing strip 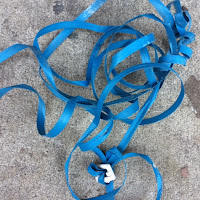 (which caught my eye as I was about to descend into the 2nd avenue F train subway yesterday) into the intricate baroque blooms you see below - which through robotically dividing and conquering the image into equal geometrical parts burst into designs worthy of Versailles.
I cannot get over the intensity of beauty in these things: shouldn't they all look like cheap tricks? But they don't, I think, do they? Sometimes all I've done is halve the image - certain that such a simple sandwiching couldn't possibly create much of a hoopla out of a pile of blue packing strip: but it does! Each of the first four symmetricizations featured here is, in fact, the result of this halving: each half turned horizontally facing right or left of each other, and/or reversed vertically up and down: 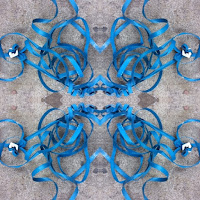 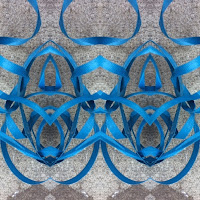 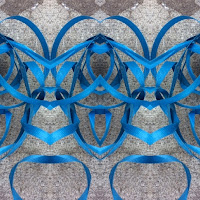 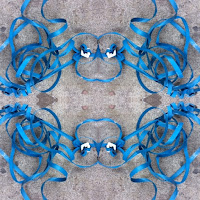 I'm in ongoing abject awe at what these miracles keep turning out to be. I'm always startled by them. I want to say something definitive about it - like I've stumbled onto the fractal heart of all existence! - but the best I can do in response to each as they pop out before my eyes  is exhale another awed holy f&#k! And then scatter them widely, just because they're so much fun: heed what Francis Bacon (why do I think also Auntie Mame?) said about money (substitute 'art') which “... is like manure, it's only good if you spread it around.”

Here are three more blue permutated lagniappes, just for the hoo-ha of it. 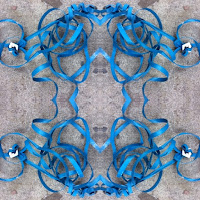 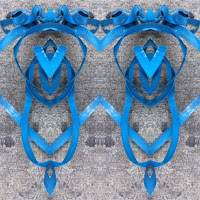 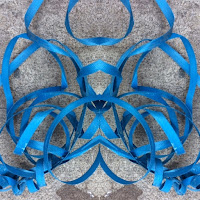