Interior Decorating (via the NY Times) vs. What I Do

From a friend who knows my apartment:

Don’t bother reading this but you can see that they have taken a page from your book. 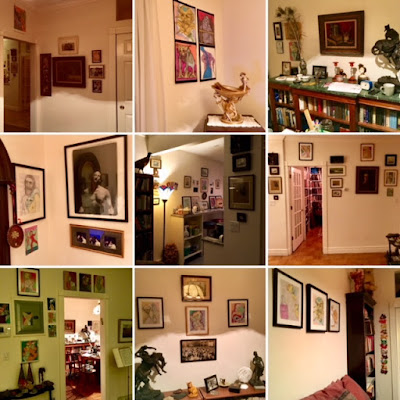 Thanks - yes, I guess this is the species of what I’ve done here, interesting to see it parsed out as a decorating idea. It was all such an organic thing for me - I guess I made ‘decisions’ about what to put where, but because the art was so personal - there’s only one piece on the wall which wasn’t created by me, my mother, my father or a friend - a pretty little framed oblong of Asian (Singapore, I think) art in the studio which a friend gave me (and which I’m thinking of taking down because it's not made by someone I know!) - the experience of putting all this up felt more like putting it where IT was destined or expected itself to be: I was carrying out its plan, sort of fulfilling its destiny. That probably sounds like a psychiatric disorder but if it is, it also afflicts me in the creative scenario I feel I'm in when I draw or I write: I’m co-creating and all I know about my co-creator is that it’s got the upper hand. Just woke up early after a long sleep - funny to find myself writing this as my first sentient act. I think I’m about to draw something! As usual I have no idea what. But I never need to know. Something else is in charge of that. I’m however in charge of making coffee ☕️ first.

At least I think I am. Anyway, something will now make coffee.

Cheerio(s)! (They're telling me to eat them, too.)