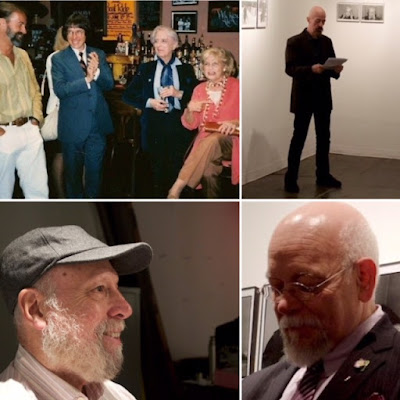 I thought I'd have a large roiling boiling pot from which to ladle irrepressible scoops about Quentin Crisp's "The Last Word" – the book Phillip Ward has so expertly brought into being – but when I think of my prime response to it so far (I’m savoring it slowly), and of the net effect of the sweet convocation of people at Leslie-Lohmann's send-off for the book a few days ago, it's the welcome sense of having been somewhere where no one was lying, no one was fabricating a prettier story than the truth could bear; indeed, everyone at The Last Word event seemed to be responding to the kindness and clarity of the nonagenarian whom we meet in this book, and who some of us had the pleasure of meeting in life. The book is quiet in the most welcome way. It gently simmers.
.
Quentin Crisp does not do verbal handstands of any sort in these pages. He says it all outright, mostly unembellished. He says what his life at 90 is like. Mostly it sucks. He neither winces at nor dwells overlong upon why: he simply lets us know what it is to be nearly blind, deaf, and all but incapable of managing stairs. The book is full of recollection of events in his life, many of which will be familiar, but told now in a sparer voice. Phillip and the book's editor Laurence Watts have accomplished a feat more artful than may first appear: they've adhered as closely as possible to the words that Quentin spoke onto the tapes from which they were transcribed, but the material is shaped so that we’re never on the bumpier ride we might have been on without their invisible intervention.
.
Quentin’s words here are stark. "I've only ever made two decisions for myself. One was to leave home when I was seventeen. The other was to leave England when I was seventy-two. Both were like falling off a cliff in the dark." They’re bred from a natural deeply woven wit – the cosmic kind, true and unassuming. "When people claim I have influenced the world, I'm polite. I smile and nod, but I don't really believe it. I can say with certainty however that I haven't allowed the world to influence me, so it seems only fair that the reverse should be the case as well." This last quote seems to me seminal. Its tone is not caustic; it’s honest. It implicitly conveys the only message Quentin felt he had to offer, one he embodied: we are born as inimitable beings. At the most fundamental level, your nature doesn’t change: like it or not, it is immune to influence. Never more explicitly the case for Quentin than when he confesses his belief that he is after all transgender, not homosexual. He’d always felt he was a woman in a man’s body. This is a profound revelation and admission and it will change how we read him, I think for our benefit. As he himself so often said, he didn’t symbolize anything outside himself. He could not be turned into a activist’s sign. But what he shared with everybody was inimitability. He was our mirror for that. We’re also, each of us, an improbable oner.
.
What do you do with this unlikely untoward thing – your nature, yourself? Dress it up and take it out into the world without apology or defense. That way, the world and you will accommodate each other as what and who you are. That’s probably the route to any freedom that counts. That marks the life fully lived.
.
I never didn't hear Quentin in every word I've read in this book. What makes his words so interesting is their rare purity of vision. Anything a pure vision looks at benefits from the experience. You want to hear and see and read how Quentin felt about – everything. And here, in The Last Word, you get what may be the most pared-down and nakedly offered Quentin Crisp we can get from a book. Here he remains, if a touch more metaphorically, what his autobiography proclaimed him to be: naked, and civil, and our servant to the last. That makes this book a stunning achievement. It is a fitting farewell from him to us, and by reading it, for us to make to him.
.
Please do read it. It's available only through Amazon.
.
https://www.amazon.com/Last-Word-Autobiography-Quentin-Crisp/dp/0692968482
.
=================================

pics: upper left, the inimitable Connie Clausen on the far right in her 70th birthday party (I’m on the far left), Quentin’s agent and loving friend (1993); upper right, me reading a portion of The Last Word at the party for it on November 26; lower left, Richard Bell, prime member of my found family and my ‘partner’ during the ‘80s when I worked most closely with Quentin: Quentin and he deeply enjoyed each other; and Phillip Ward with whom I have moved through many humbling revelations about myself and about Quentin, and whose
achievement in this book cannot be overpraised.