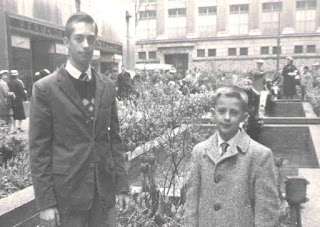 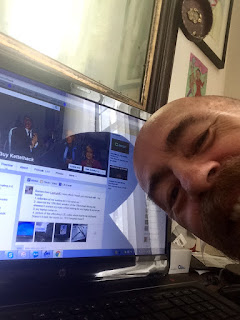 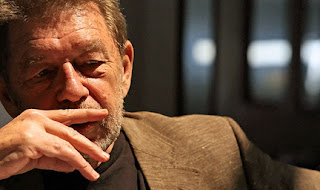 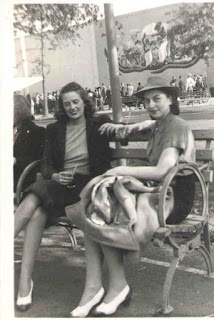 I rushed eagerly just now to this laptop in the fresh wake of listening to Pete Hamill talk to Tony Guida about Frank Sinatra (about whom Hamill wrote a book, 'Why Sinatra Matters') on the CUNY TV channel because, watching it, I got a firmer grip, for that moment anyway, on why I can sort of pledge a new allegiance to New York. Pete Hamill has always seemed to me a good candidate for THE avatar of New York - he is so deeply made of it, born into & steeped in every bit of its steam, sturm und drang, glamour, alcoholic depths, deep strengths which have served his writing so well -- out of all of which seems to have arisen a sweet unforced wisdom which entirely identifies him (as he himself all but does) as "New York."
New Yorkers who were born here - and stayed - have always struck me as a troubling extended family: it's like they know 'family secrets' of some strange half-conscious kind which, since I'm not of the clan, are closed to me -- they represent a kind of barrier through which a convert, like me, has no hope of passing. I suppose I harbor a guilty bias against converts to the New York Religion, which group I've always felt includes me. We're way too zealous, often pretentious, too eager to be thought of as professing our devotion to the NYC religion more completely than, well, you do. We make a great show of "knowing." Pushy, childish, transparent: betraying our secret certainty we're inadequate to the task of 'making' this our own.
But as I listened to Pete Hamill in this interview - particularly his description of the teenaged Sinatra standing at the Hoboken docks looking over to Manhattan's lights at night - having a version of what Quentin Crisp said when he first saw this city ("The moment I saw Manhattan, I WANTED it") -- it occurred to me that anything you deeply love you inevitably come to as an outsider - even if it's a place whose geography you're born into. My mother described similar feelings, sitting on the shore of Brooklyn Heights as a little girl in the 1920s looking over at New York. It was "other" than she - which was partly why she was inexorably drawn to it. And that's the secret I maybe hadn't quite cracked till just now, listening to Mr. Hamill's New York-accented voice: Nobody knows New York when he or she opens his or her eyes to it. It is unknowable. If you're drawn to it, you are almost by definition HUMBLY drawn to it -- we all, 'converts' or other, are faced with this huge mystery of a city, a mystery that never entirely reveals itself. It couldn't! It's ADDING to its unknowability every moment of its and our being here.
So we're all strangers to it - and far from that keeping us from loving it, those of us who do, it's what pokes the heart to yearn for it more. We're always both intimately in it and irremediably outside it. Can't have it, can't not have it.
pics: my bro Bob & me, 1960, in front of the New York Library; me where I am right now; Pete Hamill; my mother & her dear friend Millie in NYC 1939.
Mr. Hamill's interview below:
https://www.youtube.com/watch?v=qsbHTcd7JYY part 1
https://www.youtube.com/watch?v=q-8fTAEORNs part 2
Posted by Guy Kettelhack at 8:04 AM