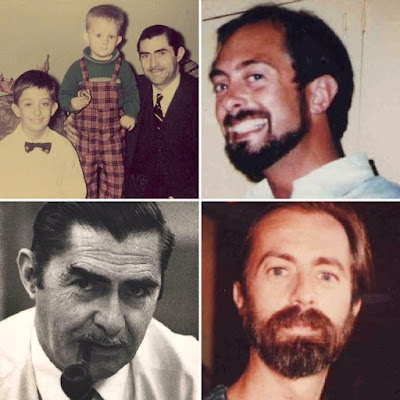 I've been thinking about the Kettelhack males, those I've known, that is. The only other Kettelhack male I know anything about is my father's father Hermann, who died in about 1922. But we three - Carl, Bob & Guy - seem to me now an interesting collective phenomenon - with what strikes me as a particularly idiosyncratic relation to what a man is, or what "male" means. The idea of a "man" was probably never more touted nor offered up with stricter parameters than it was for our baby boom generation -- those of us born between 1945 & about 1964: strictures, almost, about what was appropriate in male appearance, behavior, likes, dislikes, jobs, and all of the rest of the American masculine model whose characteristics anyone born then needn't have tediously recounted here.

But the Kettelhack males, by my best reckoning, managed to dodge a lot of those bullets - as bullets they now indeed seem. I think I can put it simply enough. When I pretty much understood myself as having the sexuality I have - which I date from my first extended moment of having sex with men in London, at age 20, on a half-year abroad semester in London in 1971 - and when my brother 'confessed' to me a couple years later (after I graduated from Middlebury in '73) that he too was "gay", I think I can say for both of us that it wasn't finally all that big a deal. Not that there wasn't plenty of angst for us which maybe more than peripherally had to do with the Sex Thing, but mostly just had to do with consequences of being who we each inimitably were (including being a Kettelhack): there was angst aplenty I suppose. But the idea of being or not being "male" I don't think was central to any of that. It's true, I liked looking at dolls in Christmas catalogues when I was a little boy, which I knew to keep secret - I wasn't good at any of the things '50s boys were supposed to be good at (baseball, etc.). I was 'talented' in the 'arts' - then often taken to be a dead giveaway for sexuality (I think, amiably, of the numerous straight organists I've known, always assumed to be gay) - all that stuff which probably did shove me in many people's eyes into a probable category of The Sexual Other, but my actual experience - even back then, even when I felt shame about not being in the Little League or something - didn't bear any of this out. Or rather didn't put in any terrible light the things I loved and the people I was attracted to.

That's where the Kettelhack part comes in, I think. My father was terrible at the whole list of what men were supposed to be good at then: carpentry, grilling anything on a barbecue, evincing any interest or involvement in sports (everybody else's dad it seemed was always building a garage or going to Dodgers' games, etc etc.). My father had a glorious high baritone operatic voice, he was a talented artist, he was funny and polite and goofy and devoted to helping and loving my mother, and often wore an ascot. He did love working in the yard, and learning however slowly and awkwardly to do things like climb ladders and nail shingles on the roof -- but he hadn't the least natural instinct for the mechanical. My mother was the one who oversaw the finances and sort of kept the ship in organizational order - she too was a talented artist and a beautiful woman, but not one who ever fussed about - I don't know, the beauty parlor or whatever. She was direct and quietly effective in ways that are often thought to be archetypically male (able to think linearly and well about what to do about getting the car seen to, etc) -- far more associated with a man's presumed nature than a woman's. So they weren't The Man and The Woman of the time, exactly; but neither weren't they recognizably female and male. They were really both gorgeously that. It just didn't seem to matter that much.

Neither my brother nor I was effeminate - that is in any marked way that I'm aware of. Neither did we strive to be 'masculine'. All we ever found ourselves able to be was us. And I guess that's the gladsome news about all this. From the get-go, the Kettelhacks managed to stay on the planet with any degree of happiness probably not least because we never had the idea we couldn't. And that's I think one of the greatest blessings from them I still enjoy and which still keeps me sidling into unexpected moments. We did things - we Kettelhack males - AND my mom, about whose 'femaleness' there was no reason to doubt - because we didn't know we couldn't.