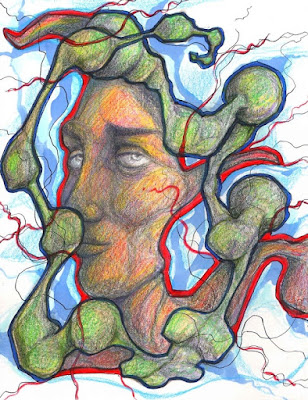 Our random bits may learn their only hope
of going on is to effect complex complicity.
The myth they do not labor under is Simplicity.

Pinocchio and Cyrano de Bergerac attempt to teach
the nose’s uses in a moral fable, one supposes. One,
you don’t lose worth if you’ve a long one. Two, your worth

diminishes as it grows long. Hard to grasp from that what’s
right and wrong. But I shall raise the cry: it’s not impertinent
to praise appurtenances which proceed from what we are,

whatever they and that may be. Indeed, the psychic aids
we breed to feed our sense of pleasure and inspire
the wherewithal to measure, treasure and enact it can be just

as complicated and protracted as they need to be without
becoming an occasion for alarm. They may or may not cause
horrific consequences we can see, but their complex anatomy

won’t necessarily cause harm, indeed may conjure up
what charms. William James described his brother Henry’s
“encrustations” – how Henry spoke and dressed and lived –

as equivalent to barnacles and sea growths which throughout
the years accrued to him, amassing to create the ornate
flask of his appearance and his manner – so they’d be up

to the considerable task of storing and then pouring
who he was into appropriate receptacles. That this made him
something of a spectacle, and not one everybody liked

(though I’d have loved it), didn’t matter. It would seem our
beings don’t like splatter, unless their mission is to make
a mess. But most of us must coalesce. We’re each a sort of

oddly dressed and stuffed and basted turkey we re-grease
and we re-heat to offer on a platter to display the whole array
of us: our most, our least. Some will choke on it, some feast.

Our random bits may learn their only hope
of going on is to effect complex complicity.
The myth they do not labor under is Simplicity.