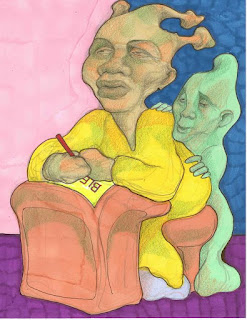 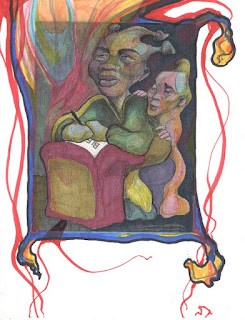 Now, apparently, largely (consciously) unbeknownst to me - I had to stumble on the evidence before I could acknowledge it - over the years I've written at least three poems about, and sometimes with the phrase in its title, 'the middle distance'. You know, how one characterizes when you sort of float off and look out in front of you without seeing anything in particular: the daydream look, the mild meditative look, the look babies often have while their cerebellums are busy snapping synapses & building bridges & other mechanical mental stuff they'll need when they have to fill out tax returns.
The 'news' to me is that, again without knowing (remembering) it - i.e., in the very out-there dissociative state "middle distance" is meant to imply - I seem to have been doing a kind of ad hoc investigation of Looking Into the Middle Distance for quite a while. Now that I'm conscious of it, I realize I'm absolutely fascinated with that condition of mind. It seems to open the Doors of Perception in ways not unlike what we do when we dream, and possibly very like what we'll do when we approach physical death. There's something of the shaman in it. It's a kind of utterly comfortable purgatory: a thing you can imagine babies would want to escape to whenever they could. And yet, as some of you know, I don't believe in 'escape.' I believe in distraction. I believe that everything is distraction - a sort of snap or whistle to tell us, okay, look HERE now. I believe 'distraction' is as good a word as any to describe what every single thought or expressed feeling we have IS - that is, it signals we've shifted, and we've shifted because something distracted us to look in another direction. We're always seeing what we make up to see - and it doesn't seem to me that we ever see anything new without some prodding - inner or outer - to make us have to or want to see it.
Oh, you know me. This is how I go on.
But another interesting thing to the Artist in me (god I hate calling myself that; I just dislike the word, period) began to occur when I read the other two or three poems and they struck me as blah and so-what?-superficial. So I knew I had to write another poem about it. And boy it took long a tortuous and torturous time coming. I've rarely felt I had to tease such elaborate verbal constructions out - but somehow that's what had to happen. As usual, I have no idea if the result is "good" or "bad" - I just know it's done.
But the drawing! I was tempted to use one of the middle distance poem drawings again - I rather like it - but I couldn't make IT want to come out like that - at least not in its original form. So boy, did I ever get out there and into it and tart it up. I printed out a black-&-white copy (I don't have a color printer) and that became, as you can see, the template for a lurid explosion/implosion of hues. So that's my news. To illustrate which, here's the before-and-after.
There, wasn't that fun? (I know, if only I wouldn't use so many WORDS.)
good night and happy whatever-it-is day. Happy Lady Day! Billie Holiday! Let's have that instead. Let's give the day to her.
Posted by Guy Kettelhack at 8:03 PM