Wystan, Emily and Me 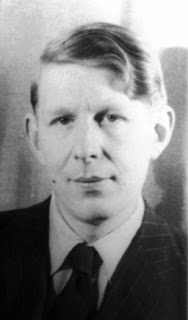 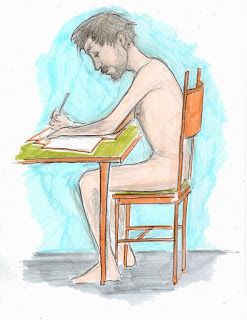 I've never as a first response been much drawn to the idea or the practice of poetry - but back in January 1997 (the year I began to write my version of it), in the now long gone Chelsea Barnes & Noble, I decided to leaf randomly through several poetry books to see what I could see. Since I'd started to write it, I was curious how other people did it.
I was arrested (several meanings of that word intended) only by two collections I'd picked up, one of W.H. Auden, the other of Emily Dickinson and - ha! just realized this is how Henry James first seduced me - as I flipped serendipitously from this page to that, I found, as I'd found with James, that I was never not hearing a human voice not only that I could 'relate' to, but that seemed in some way viscerally 'mine.' Trust what I'm not saying: that I thought I was they (or anywhere as 'good' a writer as they) - but like vibrato or timbre or timing or melodic range, I heard a cadenced articulation that completely married with the sounds in my own head.
I was especially delighted by what I took to be Auden and Dickinson's constitutional can't-not-do-it attraction to rhyme and meter - and their bravado in turning that to their own inimitable and (especially in Dickinson) sometimes inscrutable ends. I learned later, reading about their lives, that they both played piano - Emily would improvise on it (imagine!), Auden would often loudly bang out hymns - but music's assonance and beats seemed to be their unquestioned ground. They wrote by ear. Same with James, who to me is really more poet than novelist.
Well, anyway, now, I've just ferreted out a couple instances of Auden & Dickinson that I may have read, might as well have read, in that Barnes & Noble expedition, since they both sound the notes I responded to then and respond to now. Here's maybe the point. I don't hear them as a category of literature: as, that is, "poems." I suppose that's what they are but to me it injures their delicate idiosyncrasy to label it an abstraction. I feel like I'm hearing Wystan and Emily speak to me. Not in 'my' language, exactly, but in a language that enters me like Quentin Crisp said surrealism entered England's veins - as an effortless inoculation, forever retained.
That I've become their unresisting prey is part of my thrill and possible downfall - though hasn't proved - yet - to be murderous. Which in Emily's case, it might: borne out here by the two last stanzas of "I Felt a Funeral, in my Brain" - more harrowing than anything to be found Sartrean existentialism. Emily is constituted, in a way nobody else I know of is, to talk to God about death, and give Him what fo'. Or to prove to God that he's irrelevant. She can be a scary lady. Maybe she always is. But I can be a scary muhfuh, too.
The Auden quote, from Lullabye, is beautifully strange - its slightly 'off' meter (as I hear it) softly jars in two of its lines ("Individual beauty from" & "The entirely beautiful"), to me insisting on the gentlest irregularity (which Dickinson did far more often than Auden & not so gently) both I think to make us feel the pang of "Human on my faithless arm" and to give both lines a light stress of importance, but mostly, to me, to keep his words breathing and warm and in the realm of the actual. Not typical of his virtuosic demonstration of received form (sonnet, sestina, etc.) - but it's as human as the sweat-scent of two lovers in a rumpled bed. Which is of course virtuosic, too.
These voices are what made me want to employ the sounds in my own head in forms that most people think of as 'poems.' Who knows whether they are or not. That's a question for college English departments, and they're welcome to it.
last two stanzas of "I Felt a Funeral, in my Brain" dickinson
As all the Heavens were a Bell,
And Being, but an Ear,
And I, and Silence, some strange Race,
Wrecked, solitary, here -
And then a Plank in Reason, broke,
And I dropped down, and down -
And hit a World, at every plunge,
And Finished knowing - then -
=======================
first stanza of Auden's "Lullabye"
Lay your sleeping head, my love,
Human on my faithless arm;
Time and fevers burn away
Individual beauty from
Thoughtful children, and the grave
Proves the child ephemeral:
But in my arms till break of day
Let the living creature lie,
Mortal, guilty, but to me
The entirely beautiful.
Posted by Guy Kettelhack at 5:26 AM